In what has been a brilliant season, one that has already brought us league title number 55, it’s so easy to pick out individuals all over the pitch.

Allan McGregor having yet another brilliant season, the captain James Tavernier putting in the season of his life, the ageless Steven Davis still controlling games with ease, the development of the younger players like Ryan Kent, Ianis Hagi and Joe Aribo or the focal point that is El Bufalo.

You can pick out any number of players and it’s easy to highlight their importance to the teams success. However, it’s the big man at the back that deserves his plaudits.

The English CB was one of Steven Gerrard’s first signings upon taking charge as manager, brought in to rebuild a defence that had just shipped 50 goals in the league alone, more than any other team that finished in the top 7.

The number of goals conceded has dropped in each season since Goldson arrived: 27 in his first season, 19 the following season and an almost unbelievable 9 so far this campaign.

That despite his CB partner changing on a regular basis. Goldson has been partnered during that time by Katic, Worrall, Helander, Edmundson and Balogun.

His consistency despite who plays alongside him has been a crucial part of the team kicking on since he arrived at the club.

Heart surgery had severely limited his playing time in previous seasons, but Goldson has been a stalwart for Steven Gerrard. The CB is on schedule to play over 50 games for the 3rd straight season and has already reached 150 games in total, this season he leads the league in minutes played as he crossed the 4000 mark this weekend.

This season in particular has been a changing of the guard in Scottish football, a fully rebuilt Rangers have returned to their natural place at the top of the pile and left the rest of the league in the dust and Goldson has been vital to that in all aspects of the game, rightfully making him a leading candidate for Player Of The Year.

On an individual level, the defensive numbers speak for themselves: Goldson is top 5 in the league in aerial duels, winning over 70% of his battles. Given the amount of high ball football Rangers face that is a vital contribution as we no longer lose the physical battles.

Teams continue to use the high ball approach whether from deep or out wide, but Goldson’s aerial dominance is a big part of why they are having very little success, he is going to meet the ball and taking charge in every area of the pitch. 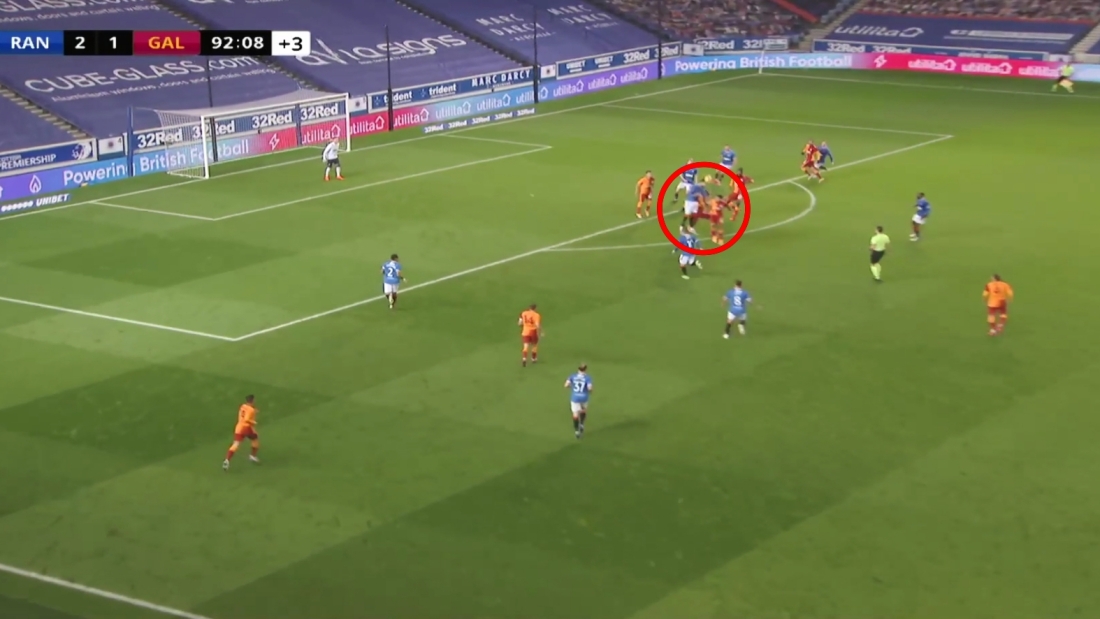 On the ground things are just as impressive, again winning over 70% of his overall defensive duels. No matter the route the opposition try to take, they eventually run into Goldson.

A perfect example of his positioning and decision making was seen at the weekend.

A fortunate deflection gave St Mirren a chance to run at the Rangers defence with Patterson and the midfield caught ahead of play. In a 3-on-3 situation Goldson found himself having to defend the wide run in behind while also keeping tabs on the ball carrier, he played the wide passing lane perfectly, delaying just long enough to remove the passing option before committing to the challenge and instantly killing the attack. 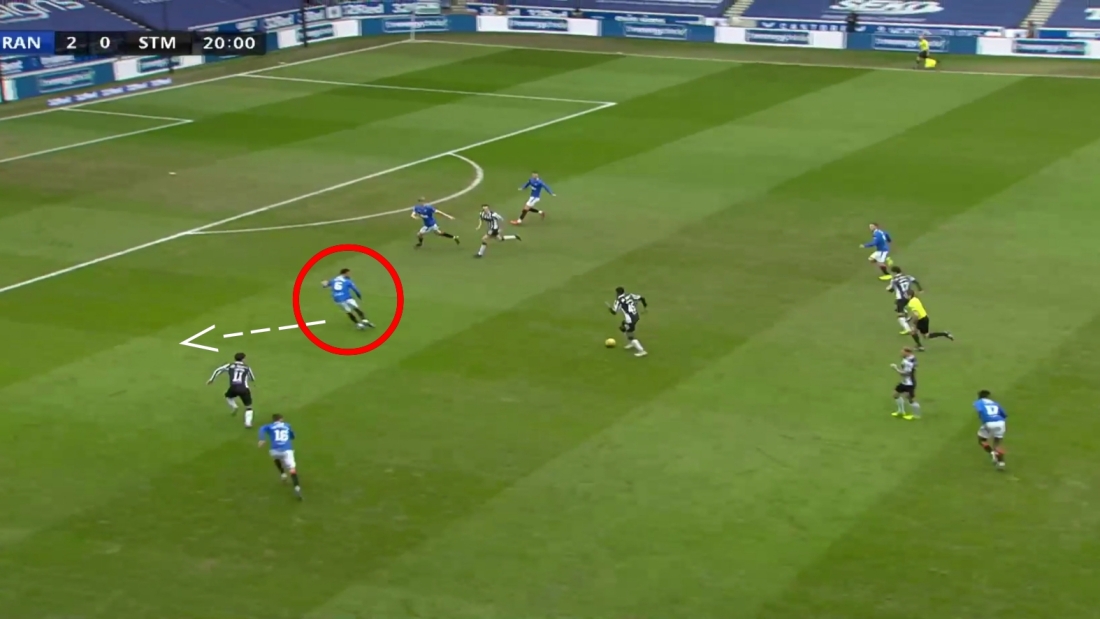 There is also the covering aspect that is vital when you have attacking fullbacks. Given the nature of the set up there will be times throughout games when the fullbacks are caught high, be it while attacking or just pressing, and that leaves spaces in the channels to exploit.

All season Goldson has covered those wide spaces as well as any CB in the league, his reading of danger and timing of challenges has allowed Tavernier, and now Patterson, the freedom to play higher knowing that he will be there to sweep up any danger.

However, as brilliant as he has been defensively, it is far from the only area that he has been vital.

The area of Goldson’s game that has been huge for Rangers is his ability to build attacks from the back. His passing over the top, into gaps and also through the lines has been a constant feature of our attacking play.

Teams who play higher lines have found themselves susceptible to Goldson’s excellent long range passing, regularly driving cross field passes out into the channels to get attacking players into dangerous areas while opposition players are caught ahead of the ball, or simply picking out early runs in behind. 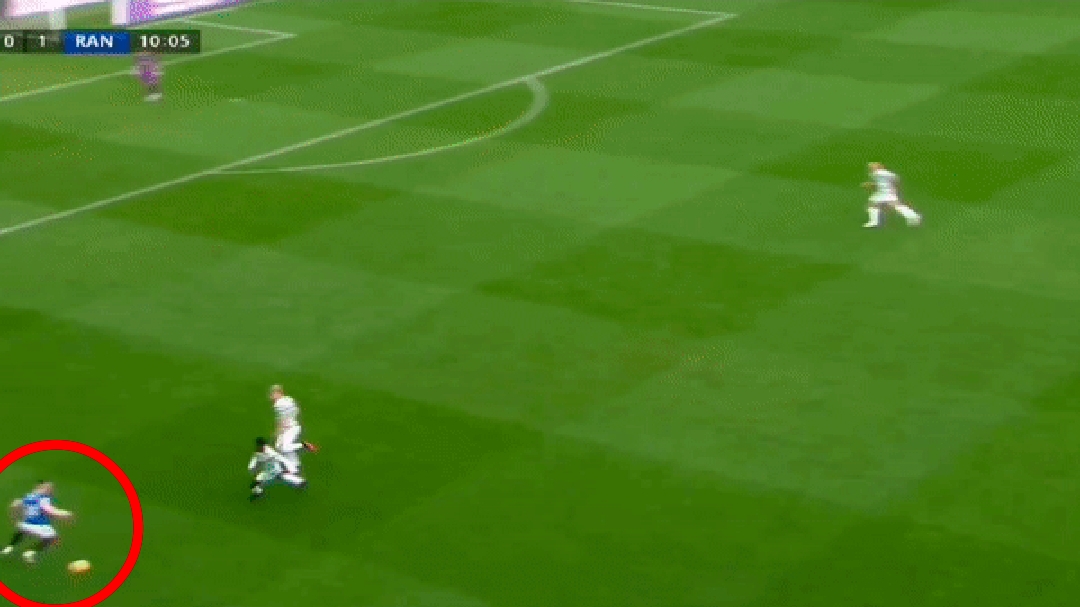 On the other hand, teams who opt to sit further back leave Goldson with plenty of time on the ball, his ability to carry the ball forward, pass through the lines or into gaps has made the tactic of parking the bus much less successful than in previous seasons as Rangers now have the passing and movement to effectively progress the ball into dangerous areas.

16 key passes in the league alone this season is a frankly outrageous number for a CB.

78% accuracy on forward passes, 68% accuracy on passes into the final third, over 2 progressive runs per game, Goldson has become a key part of how Rangers build attacks.

He’s also become a key part of how Rangers score goals, Goldson has registered a career best 8 goals this season and has been a major set piece threat.

A goal to beat Standard Liege, a goal to beat Dundee Utd and a double to beat Celtic at Parkhead are just some of the big moments he has produced to secure additional points for the team.

There is not a single area that Goldson has been anything short of brilliant.

He is a leader, he is the organiser and he is the rock at the heart of the best defensive unit in European football.

55 is already in the bag, there is a domestic cup to chase and there is still knockout Europa League football on the way.

On every front, Connor Goldson will be at the heart of it.

. View all posts by GaryMc